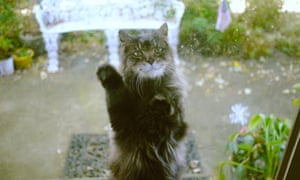 Are Bella, Tiddles and Ginger an endangered species? The companion animals of the once great pet-lovers of Britain appear to be falling out of favour.

Pet food sales are in decline and the pet food market is stagnating, according to Mintel’s Lifestyle report on consumer trends. Mintel pinpoints demographic changes: an increase in older people less likely to own a pet and Generation Rent, for whom pet ownership may be prohibited.

These stats are based on a relatively small sample, but the trend is mirrored in other affluent, English-speaking countries: dog and cat ownership in the United States, Canada and particularly Australia all seem to be in decline.

But why is this? Urban living may be a factor. “Older people – more than a third of us will be over 55 in the next five years – don’t tend to have really high pet ownership,” says Ina Mitskavets, a senior analyst for Mintel. “The market is driven by families with kids, who tend to have the most pets per household.”

Peak Stuff – the preference for experiences over possessions – may also be reducing the appeal of pets. “I’ve recently got a couple of kittens,” says Mitskavets, “and my life has completely changed. So I can understand it’s a huge commitment, and a lot of people shy away from commitments these days because the pace of life is so incredible.”

Commitment-phobia is also cited by Marc Abraham, the TV vet and animal welfare campaigner. “People are reluctant to commit to pet ownership, especially dogs, because they require walking twice a day and live to 15 years old. That’s a huge commitment, and we want to go on lots of holidays,” he says. “Maybe the human need for companionship is being delivered now more by social media than getting a pet.”
Advertisement

“I can’t bear it, it’s heartbreaking,” says the novelist Jilly Cooper of the decline in pet ownership. Cooper, who campaigned for the Animals in War memorial in London and whose new novel, Mount!, has “dogs on every page”, believes that red tape is contributing to the reduction in the number of dog owners.

“It’s almost impossible to get a dog from a dogs’ home now,” she says. “Friends of mine fell in love with a greyhound [in a sanctuary] and after five meetings and walks and interviews were told they couldn’t have him because they were both out at work.” Many parks and landowners also demand that dogs are walked on a lead and, she says, “walking a dog on a lead is no fun for the dog or anybody”.

Cooper found her greyhound, Bluebell, “a huge comfort” after the death of her husband, Leo, and believes dogs are particularly beneficial for grieving or lonely older people – a view supported by a review of scientific literature in the BMJ. “The one panic for older people is that the dog might outlive them,” says Cooper, “but it’s worth the risk for the joy.”

Abraham agrees with Cooper. The apparent decline in pet ownership is tragic, he says, “not only for the clear health benefits that pets bring to us, but for what it teaches not just children but adults about empathy, compassion, commitment and looking after something more vulnerable than you”.

This article was amended on 13 June 2016. An earlier version said friends of Jilly Cooper were told they could not have a dog from a sanctuary because they were “out of work”. It should have said “out at work”.